It’s time to make an impact on the environment. Ireland still relies heavily on fossil fuels – about 70% of our energy is generated using oil, coal, peat, and other non-renewable sources, which has a serious effect on the environment. The government launched the Support Scheme for Renewable Heat, or “SSRH” by the Sustainable Energy Authority of Ireland (SEAI) for biomass heating; a financial incentive to encourage businesses to switch from fossil fuels to more sustainable heating.

In 2011, the Renewable Heat Incentive (RHI) was announced in the UK. This incentive, which is still running 8 years later, pays businesses and homeowners to use renewable heat sources (such as biomass boilers, heat pumps and solar thermal panels), rather than fossil fuels.

SSRH will operate in a similar way to RHI. Business owners will receive set payments per kWh of heat produced on a tiered basis, over the course of 15 years.

How does it work?

The SEAI through the SSRH scheme will pay ongoing operational support to business owners depending on the amount of heat generated. The aim is to bridge the gap between the installation and operating costs of renewable heating systems and the conventional fossil fuel alternatives. This government-funded scheme will pay 5.66c/kWh for the first 300,000kWh of heat produced, 3.02c/kWh for the next 700,000kWh, and so on. The table below gives a breakdown of the tariffs per kWh.

How can I apply?

The scheme is open to all businesses who have a legitimate use for heat – whether it is for process heating, heating sheds for farm animals or simply space-heating for your offices.

Businesses will only receive payments for displaced fossil fuels, such as oil or gas. This means that you cannot claim payments if you already have a biomass boiler for heating since before the scheme opened. However, if you decide to up-size your business and require more heat than you are already getting from your original boiler, you will be able to claim payments on the difference.

There are no limits on the capacity of the boiler. Our biomass boilers start at outputs of 18kWth and go all the way up to outputs of 10MW and more, so we have a solution for all types of businesses.

Woodco’s knowledgeable team will guide you throughout the entire application process. We will first design a bespoke system that meets your heating requirements, and then work with you to submit the application. Once you have received a letter of offer from the SEAI, you can then go ahead and have your new biomass boiler system installed and begin to claim your payments after the first quarter. 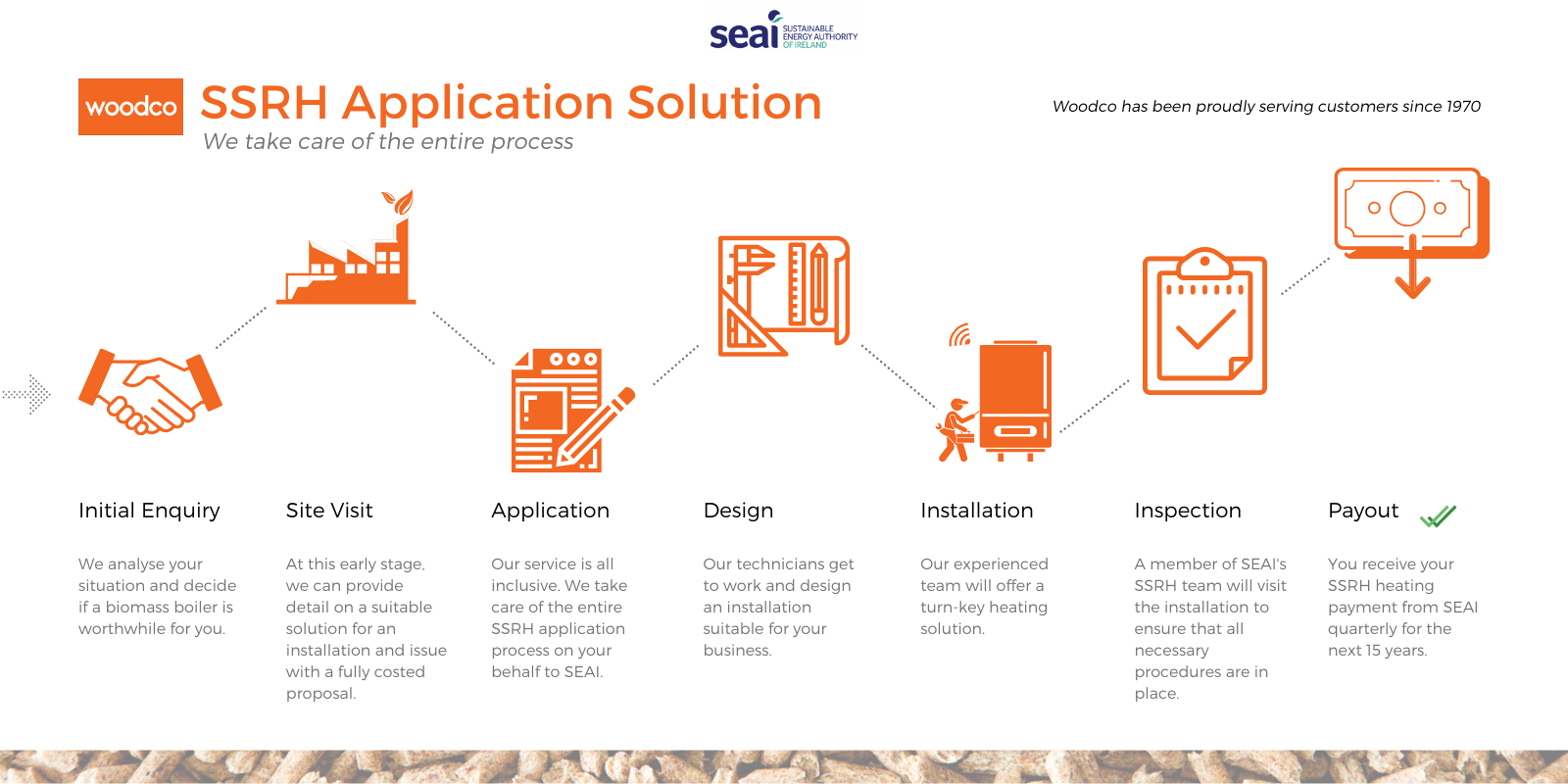 For more detailed information on the scheme, view the SSRH publication from the Department of the Environment, Climate and Communications.

For more information on how you can reduce your business’s heating bills by 80 – 90% for 15 years, contact us. Our team will be happy to talk you through your options.